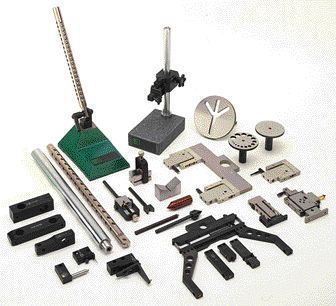 The idea behind modular gaging fixtures is to take all the elements found in high-precision, comparative gaging and turn them into reconfigurable, modular components.

Comparative gages consist of basic, common components. For example,comparative gages have solid reference anvils, a sensitive contact, part referÂ­ ences (backstops) and a readout,all mounted on a stable frame. The use of standard components enables flexible measuring devices to be designed and assembled for a wide range of workpieces. Common elements enable them to be reconfigured for similar or different applications. Whereas a traditional comparative gage might be built for one size shaft with five diameters, a modular gage can be adjusted with relative ease for five diameters of different sizes and at different locations.

Modular gaging elements can be configured for simple or complex workpiece geometries. Keeping the design of the modular components.

Benefits of a flexible, modular system include:

An initial gaging system can be constructed by the customer using standard elements obtained from a catalog. Alternatively, these elements can be ordered as a complete solution for the first setup, and then changed later as needed.

Modular, flexible gaging systems are still under active development. As noted above,these systems are not intended to replace either lowerÂ­ precision handheld gages such as calipers and micrometers, or higher-precision tools such as snap gages, bench stands or more traditional 10/00 gages. Rather,these systems are intended to complement existing gages to help adapt inspection
methodologies to an evolving manuÂ­facturing environment.