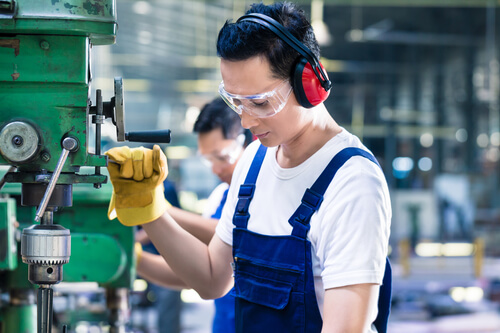 The science of measurement is known as metrology and the application of its principles plays a pivotal role throughout production process in CNC machining. This is done to make sure that each and every part is machined to the right shape and size.  Measuring dimensions of a CNC machine part with tight tolerances can be difficult. Depending on the quality, quantity and the type of work they do, there are distinct set of metrology tools in every CNC machine shop. Here are a few you should have, if you are an owner.

CMM or Coordinate Measuring Machines are mechanical devices used for automation of various measurement aspects. They are basically U-shaped with legs moving on either side of the surface plate. The probe also moves sidewise along ‘U’ bridge, allowing three-dimensional measurement. When it comes to probe component, CMMs can vary widely. The recently developed optical probes have a camera-like component scanning images at specific coordinates. Modern probes make use of white light or lasers to scan objects, recording a number of data points simultaneously. The technology allows for integration with CAD software and production of virtual 3D models, with high accuracy.

Surface plate is a flat object that is used as a zero reference for vertical measurements. For them to be useful, it needs to be in shape and properly calibrated. Given its smooth surface and lower level of contraction and expansion with temperature changes, granite is often used as flat surface.

Laser scanning arms have taken metrology to the next level, allowing metrologists to measure a wide range of dimensions at a time. Unlike basic CMMs, laser scanning saves time by taking measurements automatically from thousands of data points.

Micrometers make use of a calibrated screw, connecting to a scale that moves with the screw turning clockwise or anticlockwise. They have similar functionality as that of calipers, although they come in a variety of shapes.  Caliper micrometer similar to Vernier calipers in appearance, bore micrometer attached to a bore gage and depth micrometer.

Calipers range widely in size, shape and sophistication. Irrespective of the size, they all measure with the same principle. Two opposing tips are allowed to rest at the beginning and end of the distance being measured. Different types of calipers include Vernier calipers, dial calipers and digital calipers.

For measuring the dimension of an object, air gages make use of pressurized air. It was first introduced sometime in mid-20th century, and has evolved to become one of the most trusted tools in CNC machine shop. The principle behind its functioning include air shooting out of a calibrated nozzle, followed by recording the rate at which air is returning to multiple sensing nozzles. They are able to take readings of the air flow between the object being measured and the measuring tool.