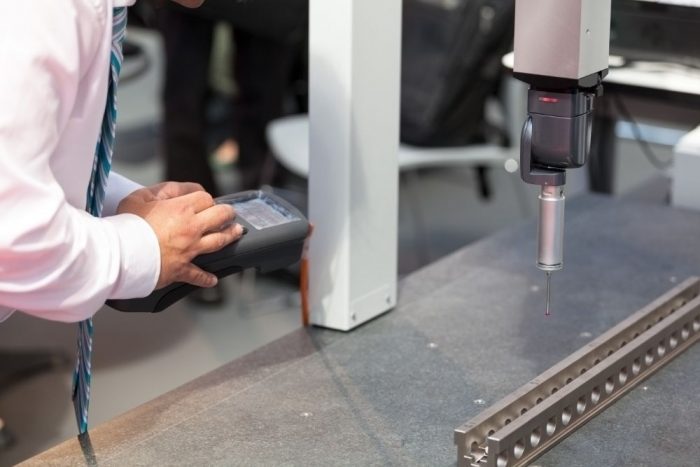 Bridge machines have become increasingly popular over the years. This type of measuring machine allows for probe movement along 3 different axes, X,Y and Z. The unique thing about this machine is that each axis contains a sensor that can judge the position of the probe on any particular axis. It is capable of doing this with micro-meter precision. The bridge machine produces something called a “point cloud” which is done by sampling the three sensors and measuring a particular point on the object.

They have a very simple structure and is easy to use. Bridge machines are also cheap to manufacture and can withstand the test of time by maintaining accuracy consistently. Usually, bridge machines are fixed on a precision granite plate and have two legs to support the carriage. It is interesting to note that a typical bridge machine is only driven on a single side while the other sides are allowed to float freely. Close to 95% of them utilize air bearings so that there is greater ease of movement.

The cantilever coordinate measuring machines are typically used to measure smaller parts. In comparison to the bridge machines, they grant access to the user on three different sides. They also only allow for probe movement on X and Y, creating limitations on the size of the X beam. The rigidity of the machine makes it only suitable for measuring smaller parts. This type of machine will work well in a shop-floor setting because it has automatic loading and unloading capabilities as well.

This type of machine is made specifically for measuring parts that are larger in size and heavy in weight but require the precision of a bridge coordinate measuring machine. Typically, gantry machines work best mounted to the floor. Thus, it is important that you provide it with a solid foundation. The smaller machines utilize four upright columns that support the Y-axis beams. On the other hand, larger gantry machines have 6 to 8 columns in relation to the length of the Y-axis.