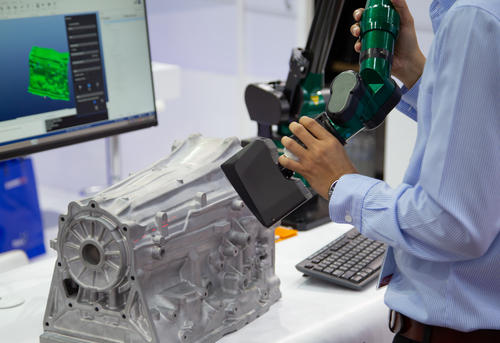 Coordinate Measuring Machines or CMMs are precision measuring machines that use the coordinate system to measure the surfaces of a product. CMMs do this by running a probe (which could be mechanical, laser or optical) along a surface and the data collected is then relayed to a data reader. The probe can either be manually controlled by an operator or can be computer controlled. Typically, CMMs will be used alongside other measuring tools such as CT scanners.

Another common term that you are likely to hear is datum which refers to points on the coordinate system. To use the earlier example of a street map, the datum can be a hotel or a river that is featured on a map. In the world of coordinate metrology, the datum, in this case, might be a hole (on a product) or a protrusion. The CMMs precisely map these points and uses them to ensure that there is consistency from one part to another.

This refers to the process of determining the space between one feature on the product to another. To use the map analogy again, this is like moving from the river to the hotel and then on to a third point. In this movement, your starting point changes (from the river and then from the hotel). This shift of the starting point from one location to another is what is called translation. Going back to CMMs, the probe acts like your finger on the map and moves from one point to another on the surface of the product, essentially translating from point to point.

Rotation is best understood by using the analogy of the map once more. When moving from one point to another, you will realize that not all points are located at right angles to where you are. What this means is that once you translate from the river to the hotel, you might realize that your third destination is not parallel to the hotel. If you were using a map, you would rotate the key to be parallel to your point of origin thus allowing you to measure the distance between your new point of origin and your next destination. CMM machines do this exact process when moving from point to point and measuring the distance from one datum to another.

These are just some of the terms that you may encounter when learning about coordinate metrology. All these terms refer to processes that make it possible for precision instruments like CMMs to measure product surfaces and ensure that parts conform to a very specific quality standard.