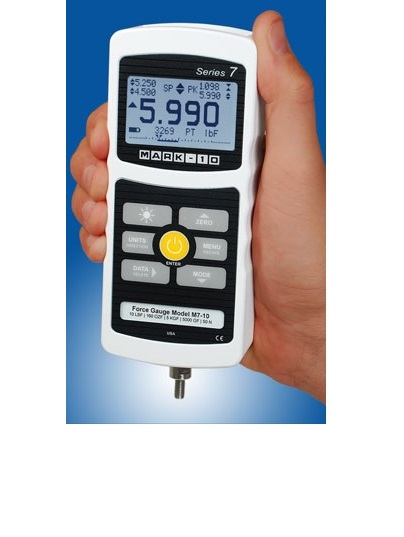 A force gage is a comprehensive solution for a component of a larger test system or specific tests. It can be easily integrated into a motorized or manual test stand, or it can even be handheld. It is straightforward for hand operated tests, and at the same time complicated enough to be integrated with motorized test stands, data collection software, and PLCs. They are commonly used in production, quality control, and research environments.

How Does A Digital Force Gage Function?

Strain gages are applied to the load cell, leading to stretching and retracting, as a variable force deforms the structure. Force is correlated to voltage as the deformation changes the electrical resistance. It’s converted into a digital signal, manipulated by a microprocessor, and finally into units of N, kgF and lbF that shows up on the display. The load cell is mounted on a metal case, strong enough to bear the maximum force rating. There’s a shaft with a threaded end attached to the load cell for accommodating hooks and clamps.

Force gages are available in a range of resolutions and capacities for a wide array of applications. The capacity of a force gage should be nearest to the maximum expected force, since lower force readings are subject to errors. The peak force at which the sample broke or loosened is quite favorable. In a few cases, force gages are employed to apply a specific force to a sample to make sure it’s intact. Although it’s a handheld instrument for less-demanding applications, it’s best to mount the gage to an actuator or test stand. It helps in ensuring axial alignment with position to the load cell shaft.

The variety in force gage models have increased over the years, satisfying outputs, user interface, physical size and accuracy. More complex models include things like configuring the upper and lower limits within a gage, along with tones and indicators alerting the operator if the outcome is outside of reference range.

Continuous data collection may be required sometimes for analysis of force vs. distance or time, when combined with a scale or an encoder. USB may be used to extract data to a system for graphing, tabulation, and manipulation. Data memory helps in saving individual readings for downloading it later, especially when the measurements are being taken in a remote area.

Ergonomics and high throughput is quite important in busy testing environments. These objectives are addressed through a footswitch input for activation of functions such as zero display, data output and data storage. Password protection takes care of concern regarding improper use in high volume environments.

Calibration of force gages is generally done using certified dead weights. A simple L-bracket with hook and dead weights are enough for gages with capacities of roughly 100 lbF.  For higher capacities, reference load cells are used and often placed on a high capacity test stand. For accurate positioning, fine screw pitch on such stands is very helpful.